To reduce the environmental impact of its operations, semiconductor equipment maker Applied Materials is setting a goal of hitting 100% renewable energy sourcing in the U.S. by 2022 and worldwide by 2030.

“While we all owe a debt of gratitude to the medical professionals on the frontlines of this pandemic, I think we should also feel a strong sense of responsibility being a part of the electronics industry,” Dickerson said. “From putting AI and big data into the hands of researchers seeking treatments and vaccines to the communications and cloud technologies that are keeping the global economy running, the world is relying on semiconductors more than ever before.”

Dickerson said the company has signed a power purchase agreement with Apex Clean Energy, a key step toward reaching its renewable energy targets. In addition, the company committed to the Science Based Targets initiative (SBTi) and the Task Force on Climate-Related Financial Disclosures (TCFD).

Applied is also driving several initiatives with its customers and suppliers to promote greater sustainability in the whole chip equipment industry, which supports the $415 billion semiconductor industry. The aim is to introduce new hardware for making chips that reduces energy use, chemical use, and the need for cleanroom space.

While Dickerson focused on tech manufacturing, former vice president Al Gore gave a talk in the morning at Semicon West’s virtual event where he tried to convey the big picture. “We’re still putting 152 million tons of manmade, heat-trapping, global warming pollution into the thin shell of atmosphere surrounding our planet every 24 hours,” Gore said. “The molecules on average stay up there for about 100 years. The math is really complicated when you go beyond that, but that’s a good number to use. And the amount that’s accumulated up there now is trapping as much extra heat every day as would be released by 500,000 Hiroshima-class atomic bombs exploding every single day.”

Gore said that in the past decade, the global economy suffered $2.5 trillion in damage from climate-related extreme weather. “We have to make policy changes and speed up the introduction of new technologies to help us solve this crisis,” Gore said. “Just one note of comparison between the pandemic and the climate crisis. … The pandemic reminds us freshly that when scientists are warning us in dire terms and setting their hair on fire, so to speak, it’s best not to ignore them.”

As part of its new “ecoUP” initiative, Applied is announcing a “3 by 30” goal for its manufacturing systems. On a per-wafer basis, Applied targets a 30% reduction in equivalent energy consumption along with a 30% reduction in chemical consumption and a 30% increase in throughput density – which is the number of wafers processed per square foot of cleanroom space – all by 2030.

In addition, Applied is launching a program aimed at creating a more sustainable and just supply chain for semiconductor and display manufacturing. It will optimize material and parts selection, procurement, packaging, warehousing, transportation, and recycling to reduce energy and emissions and conserve resources. The program also aims to promote ethics, human rights, diversity, and inclusion throughout the supply chain.

Dickerson said Applied welcomes diversity and will not be complacent about inequalities and discrimination in the community. So Applied will be transparent about disclosing its representation data — it’s already on its website — and will bring in more women and underrepresented minorities “at all levels” of the company.

“AI and the data economy will change everything. Every industry, every aspect of lives, the very foundation of competition will be transformed,” Dickerson said. “AI is the biggest inflection of our lifetimes and will generate $10 trillion of economic value in the next decade. By 2030, there could be half a trillion connected devices at the edge.”

But that also represents a grave threat to climate change, given the heat (and other environmental impacts) datacenters supporting those devices give off. And data generation could grow to half a yottabyte a year. That’s 10 to the power of 24 bytes of data. Almost all that data will be generated by machines and then consumed by machines, Dickerson said.

“Over the past 50 years, semiconductor technology has changed the world. This industry has blazed a trail in innovation, trying new ideas and re-imagining how things can be better,” Dickerson said. “I strongly believe we are in a privileged position to shape the future.” 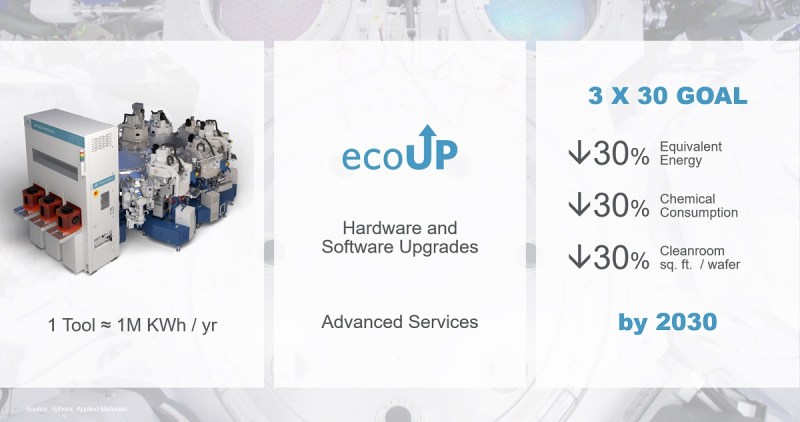 Above: Applied Materials wants to reduce its environmental impact 30% by 2030.

And those chips go into global electronics devices — all the PCs, tablets, servers, routers, smartphones, TVs, and so on. Those devices generate almost a billion tons of carbon dioxide annually, or about 10,000 times the emissions that Applied itself produces.

All told, there are 1,000 semiconductor factories operating around the globe today. Each advanced factory that produces 50,000 wafers per month consumes a terawatt-hour per year, or close to the electricity used by 100,000 city residents.

Dickerson noted that AI yields actionable insights that can improve business, but he said, “AI has an Achilles heel that — unless addressed — will prevent it from reaching its true potential. That Achilles heel is power consumption. Training a neural network is incredibly energy intensive when done with the technology that’s available today.”

Today, traditional datacenters consume about 2% of the world’s electricity. But Dickerson said that if we build out AI data centers using current-generation technology, they could potentially consume 15% of the world’s electrical power by 2025. This model is dominated by a new and fast-growing workload: training AI models with visual data.

Analysts at SEMI and VLSI expect annual semiconductor revenues to grow to a trillion dollars by 2030 (from about $415 million in 2020). Over the past 20 years, the industry has doubled in size, and now it is expected to double again, but twice as fast. The trick is how to double or triple an industry’s size without doubling or tripling its carbon footprint, Dickerson said.

“Applied will not increase environmental impact in line with our business growth,” he said.

The Connected Lives of Babies: Protecting First Footprints in the Digital World, Part 1