The Chinese government has cracked down on unlicensed mobile games in China’s Apple App Store, removing more than 2,500 in the first week of July, according to measurement firm Sensor Tower.

Among those removed are Hay Day from Supercell, which launched the farming game back in 2012. Also gone are Nonstop Chuck Norris from Flaregames, Contract Killer Zombies 2 from Glu, ASMR Slicing from Crazy Labs, and Solitaire from Zynga.

For years, China has been the No. 1 mobile game market in the world, and it generated the highest revenue of any country on the App Store, with 2019 revenues of $12.6 billion. So far, the games removed have been a small part of that revenue. But Sensor Tower expects China to order more removals in the coming weeks.

Sensor Tower said the games are being removed in advance of a July 31 deadline for all games to have licenses from the Chinese government. In the meantime, 660 games have received licenses and have been approved. Sensor Tower said there were four times more removals in the first week of July and than in the first week in June, and five times more removals than in May.

China’s mobile game regulations require that all titles receive a license from the country’s National Press and Publication Administration before release to ensure the apps meet the country’s strict rules on content. In the past, games were able to get on the iOS app store without approval. But Apple is now adhering to the regulations. The game makers have until July 31 to enter their approval number and supporting documentation to their game’s page in the app store. After July 31, games without an ISBN will be removed until a license number is provided, Sensor Tower said. 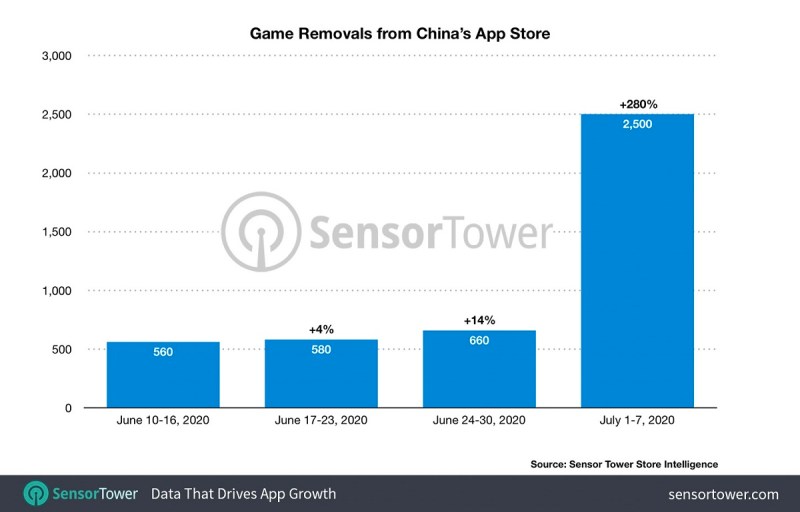 Above: China’s game removals are increasing in the China Apple App Store.

The games removed in the first seven days of July had generated a combined $34.7 million in lifetime gross revenue in China, and had accumulated more than 133 million downloads in the country.

Sensor Tower said its 2,500 game figure is only capturing those games that were large enough to rank in the App Store’s game subcategories at some point. Of the games removed, nearly 2,000 titles had generated less than 10,000 downloads since 2012.

“Apple is following through on enforcing an existing regulation that prohibits publishing and distributing games without a government-issued ISBN,” said Lisa Cosmas Hanson, president of Niko Partners, in an email. “The overall impact on the China derived mobile games market revenue will be minimal, as 97 of the top 100 games have the requisite license. The emotional impact on the removal of thousands of games is significant. The law isn’t new.”

Cosmas Hanson said the application fee is negligible. But she said it is a tedious process and a developer will need to know what to do and submit the forms in Chinese. Niko Partners offers a report on the regulatory process to launch a game in China, and many developers spend money to engage a consultant to help submit all of the forms.

Hitman 3 speedrun: How I beat the Dubai stage in 24 seconds