If your VC firm can’t find talented Black founders, let me introduce you

Martin Luther King Jr. once said during a 1967 NBC interview approximately one year before his assassination, “I believe we ought to do all we can and seek to lift ourselves by our own boot straps, but it’s a cruel jest to say to a bootless man that he ought to lift himself by his own bootstraps.”

As a Black founder and CEO of a rapidly growing FinTech startup (Zirtue), I am encouraged by the recent pledges of support from venture capital firms who have historically invested less than 1% of their capital in startups with Black founders. The caveat is we have previously lived through short-term Black funding initiatives that had good intentions but no teeth.

These prior funding and inclusion initiatives meant the initial thesis of funding Black people was eventually diluted down to the word of the day (e.g. Diversity of Thought, People of Color, Minorities, etc.), thus losing the initial and intended purpose altogether. This type of often hidden scope-creep is a key contributor to the systemic racism that plagues the Black community and is simply not the solution. Less than 1% is not an accident, and neither is the fact that less than 3% of venture investment professionals are Black with limited or no influence on their investment committees.

It’s easy not to like VC firms, but they do play a vital role in the startup funding life cycle and, ultimately, the exits they support create generational wealth. The problem is that their investment criteria are quite exclusionary and frankly crippling Black founders who could be successful if they had access to the same capital and startup resources offered to White founders (87%) and Asian founders (12%).

According to the National Venture Capital Association, VC firms deployed over $136 billion across 10,777 deals in 2019. Here’s how that invested capital breaks down across racial groups: 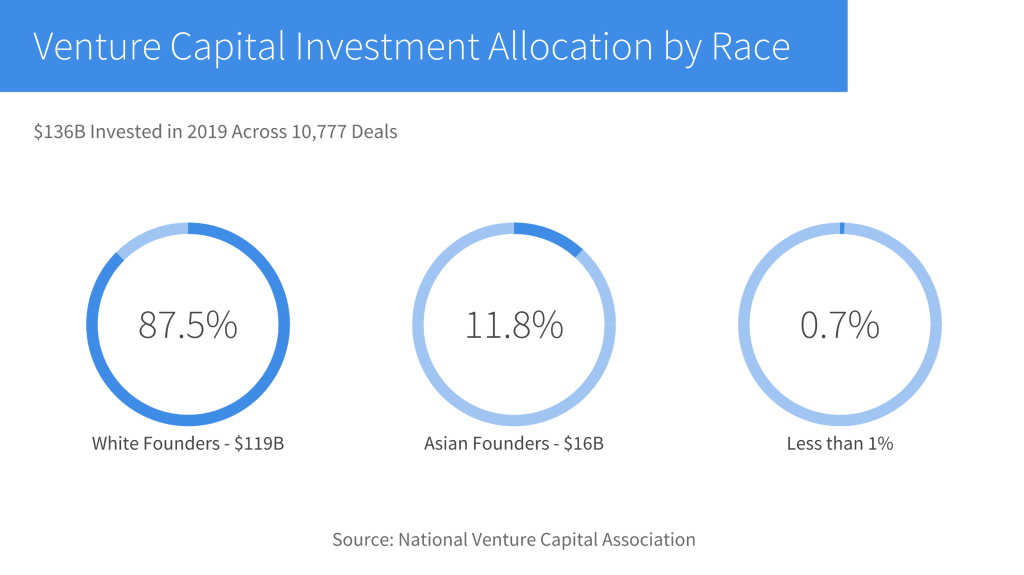 All VC investments come with a high degree of risk, since startups have a 70% chance of failure. VC firms have consistently stated by way of their investment actions that they will take an investment risk with non-Black entrepreneurs 99% of the time. Systemic racism, inequality, exclusion, and displacement are literally and financially killing Black people. We are all defined equally by what we do and what we don’t do when it matters. Economic disparities are at the heart of public and private racism that ultimately bleed out into the streets.

The impact and implications of financial exclusion are clear, since VC investment is one of the largest wealth creators and liquidity event drivers for entrepreneurs.

Obtaining an investment from a VC firm is extremely hard to do if you’re White and virtually impossible if you’re Black. This is not a quality, sourcing, deal flow, or pipeline issue. I personally know dozens of high-quality seasoned Black founders who are leveraging their limited resources to bootstrap their startups, and I would be more than happy to introduce any VC to them. It’s hard to find what you’re not looking for — and even harder if the lenses you look through don’t recognize the talent and value Black founders bring to your portfolio.

If you are a VC firm in need of Black founder deal flow or introductions, I’m more than happy to help. Please contact me directly at BlackFounderIntroductions@Zirtue.com.