If you don’t know, 20XX is Mega Man X-inspired roguelike. Think something like Dead Cells but with gameplay mechanics and ideas taken from Mega Man X4. Its levels are random, and no one expects you to beat the game on your first try. That’s unlikely to happen since a single death starts you back at the beginning. Instead, you can unlock upgrades that persist through future runs with each attempt, so the idea is to keep pushing, getting stronger and better both through experience and these earned upgrades (and a little luck).

20XX launched in 2016 after a lengthy early access. Now its sequel, 30XX, is on the way, and you can download a pre-alpha demo on Steam. I had a chance to play through this demo while chatting with Chris King, founder of 30XX developer Batterystaple Games.

When you start playing, the visuals hit you as the most striking difference between 30XX and 20XX. The earlier game’s graphics have a hand-drawn quality to them. It looked OK, but it didn’t feel like Mega Man. 30XX, however, features beautiful pixel art that is much closer to the Mega Man spirit.

“I saw Glauber Kotaki on Twitter. He’s the artist and animator of Rogue Legacy and Chasm, a bunch of gorgeous games,” King said after I asked about the new look. “He said he had some extra time in his schedule, and we’d been thinking about prototyping a new game with a fantastic pixel art style. We were lucky to pick him up while he was available. We’d always known the game would do well in a high quality pixel style, so we were happy to get there. But it’s definitely a lot of work.” 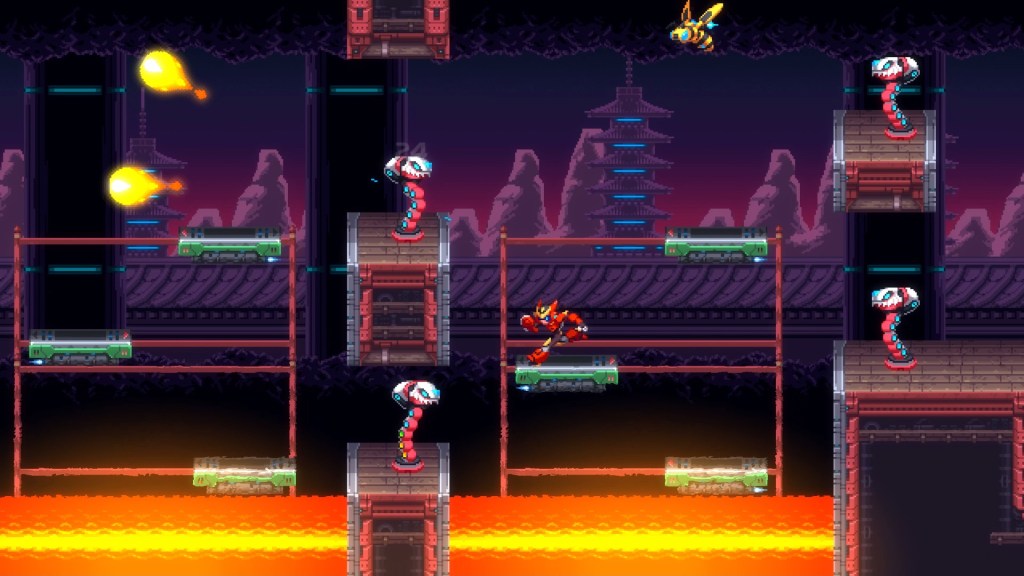 Above: 30XX’s visuals got a hand from Rogue Legacy’s Glauber Kotaki.

While the visuals alone are a big enough upgrade to make this sequel exciting, 30XX is also getting several gameplay enhancements. A lot of this involves making the two playable characters, Nina and Ace, feel more distinct. Nina plays like X from the Mega Man X games, focusing on a long-range, chargeable buster gun for attacks. Ace is more like Zero, attacking with an energy saber.

“There’s a ton of systems changes. One of the big ones here is Ace and Nina in 30XX both have entirely unique power sets,” King explained. “They have unique skills: totally different kits, because their primary weapons are different, and they get different weapon techniques from bosses. In 20XX, Ace and Nina have different primary weapons. Ace is all-melee, and Nina is all-ranged. But they get the same powers from bosses. By the time you get to the end of a run, they don’t always feel that distinctive anymore. This time around they have entirely new distinct move sets from one another. They play very differently. That’s also a huge thing we wanted to do in the sequel.”

I spent most of the demo playing as Ace. After beating the first boss, a fire-themed ape named Zen Primus, I unlocked a fire uppercut ability. This could deal damage to enemies in close range or above me. It also can give me some vertical boosts for tricky platforming. Nina, meanwhile gets a mortar shot that she can fire above her head. It goes straight up until you press the attack button again, which then has it split into two and come crashing down.

The randomly generated levels feel fun and surprisingly, given their random nature, sensible. Although elements of the stages are random, they still have cornerstone experiences that you’ll encounter every time. In that fire level, you’ll always come across a sequence about halfway through the stage where a rolling spiked ball chases you. It is always there. But the areas it chases you through can look different.

“Every time you play this Burning Temple stage, you’re going to have some number of those big open forest level pieces, and you’ll have some of what our fans call the Indian Jones segment, where the big rolling wheel chases you down the slope,” King explained. “Then you’ll have that mini-boss room, if the mini-boss is still alive, and then it’s going to close off with an interior temple phase full of moving platforms and flame shooters and all the platforming complexity the level wants to throw at you.”

These cornerstone experiences give the stages a structure that the random elements can dance around.

“Every time you play a Burning Temple level, you’ll have those three major beats,” King said. “They’ll be the foundations of the level. But the level pieces we’re using to flesh that out will still change every time. You’ll still get the replayable experience, the unique situations, but it gives the player an internal feel of how the level is progressing. You know that once you’ve gotten past the mini-boss, you know there’s the hard temple part and then the boss. You’ll be able to get an established feel for where you are in the level progression, even though you’ve never seen this level before, which we’re super happy about.” 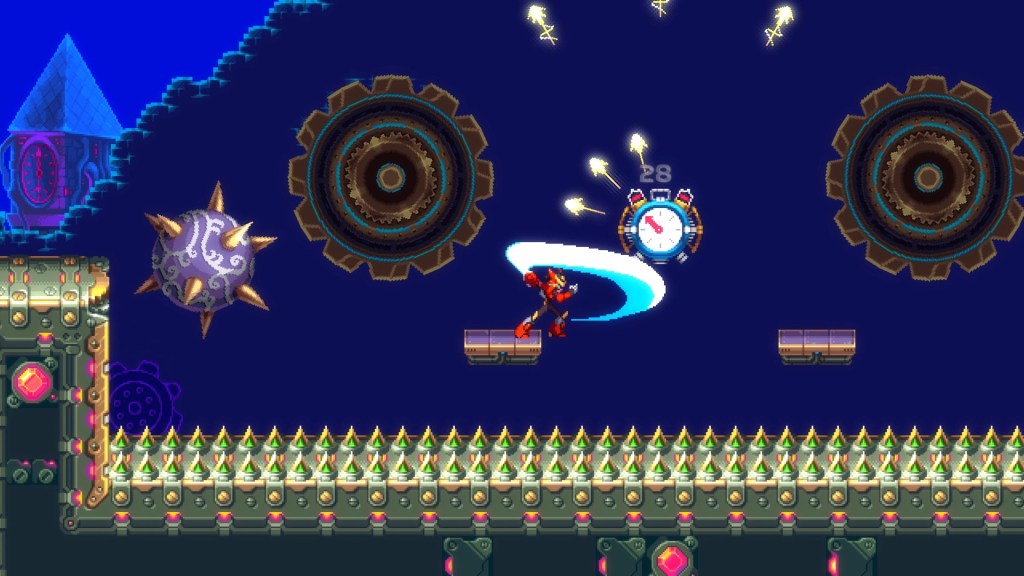 Above: Levels are random, but that spiked ball will be there every time.

You’ll also discover random upgrades as you play. These only last as long as your run. You may get a pickup that reduces the knockback damage you receive. During one run, I got a new weapon for Ace that replaced my saber with an attack that felt more like fanning throwing knives, giving some range to my basic attacks.

It’s these random elements that make the game fun, even if you’re replaying the “same” level.

It all comes to together.

30XX is exciting. The gameplay captures that Mega Man X feel beautifully. As someone who has spent a good amount of time with those games and other Mega Man sub-series like the Mega Man Zero titles, I was happily able to transfer my wall-jumping and air-dashing prowess to 30XX. And while 20XX had visuals that looked a bit amateur, 30XX has gorgeous pixel art.

While 20XX is the start of a good idea, 30XX has the capability to turn that concept into a phenomenal game. Even in this pre-alpha state, 30XX is a lot of fun. And that’s without trying two-play co-op, something that the game does support and could add another layer of excitement (and chaos) to the action.

I’m probably too much of a Mega Man purist to be too interested in co-op, since I worry it would just slow me down. But I imagine even with me ignoring that feature, 30XX is going to be something that I love.