During its annual hardware event today, Amazon announced a slew of new Ring-branded devices of all shapes and sizes for homes and cars. It launched Ring Car Cam, a new dashcam that the company says works with 99% of vehicles; the Ring Always Home Cam, a miniature drone that flies through rooms to surveil all that’s going on; and a mailbox sensor that alerts users when mail arrives.

Perhaps with the exception of the Always Home Cam, none of Ring’s new products are particularly novel or groundbreaking. But importantly, they come months after the U.S. House Committee on Oversight and Reform launched an investigation into Ring’s data-sharing partnerships with law enforcement and after a Motherboard investigation discovered forums containing exploits of Ring devices used in the cyberattacks. Throughout Amazon’s presentation today, the company repeatedly emphasized a commitment to security and privacy, including its recently mandated two-factor authentication solution.

Always Home Cam is by far the most intriguing addition to the Ring lineup. The $250 quadcopter hovers along pre-set paths looking for noise. It records 1080p video when in motion, automatically landing in a dock when it runs out of battery power. Ring founder Jamie Siminoff, speaking to The Verge, says that the obstacle-avoiding, enclosed-propeller Always Home Cam, which took years to develop, builds a map of the home it can follow, allowing users to ask it for specific viewpoints such as the kitchen or bedroom. It can be either commanded to fly on-demand or programmed to fly when a linked Ring Alarm system detects a disturbance. 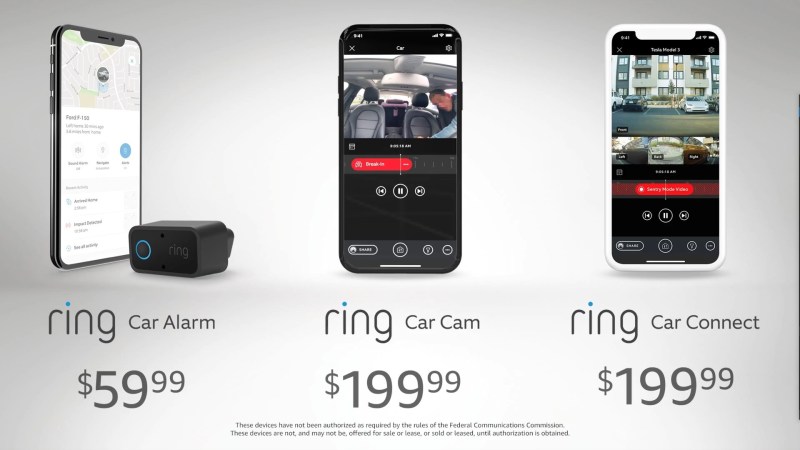 On the car side of things, there’s Car Cam ($200), which plugs into a standard OBD-II port, connects via Wi-Fi or LET, and has a traffic stop detection feature that alerts family members and starts recording when the driver is pulled over. Car Cam monitors the inside of the car with a second camera to accomplish this; users can say, “Alexa, I’m being pulled over” to trigger the cameras and save footage to the cloud. Car Cam also incorporates a siren and uses LTE to send notifications, with support for Amazon’s recently launched Sidewalk wireless network and car accident recognition.

Amazon says that there are a number of privacy features built in, such as a physical camera shutter and the ability to electronically disable the interior video and audio recording. It, along with the other Ring products announced today, will be available starting next year. 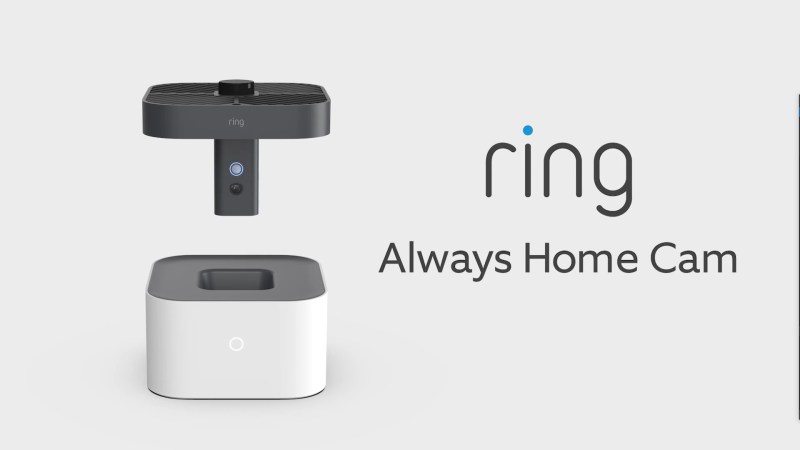 There’s also a new car alarm device called Ring Car Alarm ($60), which supports Ring Car Connect, an API for car manufacturers to build Ring into their existing security systems. Tesla will support Car Connect to the extent that customers will be able to view footage, receive alerts for events, and check if the doors are locked or unlocked in their Tesla model 3, X, S, and Y from the Ring App, according to Amazon. As for the Car Alarm, it’ll detect break-ins, tow attempts, and collisions in whatever car it’s installed in.

The $30 Ring Mailbox Sensor, which wasn’t highlighted during the press conference, detects when the door on a mailbox opens and works with other Ring products (courtesy of Sidewalk) to record footage of mail delivery. Notifications arrive in the Ring app or via connected Alexa-enabled devices. 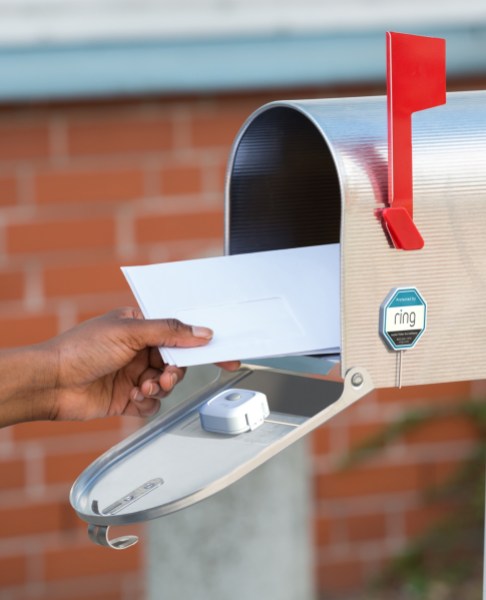 In somewhat related news, Amazon also announced that all Ring products will gain end-to-end encryption for live and recorded video footage. (Amazon expects this will be made available by the end of the year, though the company declined to provide a time frame.) It follows the launch of Control Center, a component of the Ring app that affords customers greater control over devices, services, and more, which was in some ways a direct response to criticism from advocacy groups like Fight for the Future and the Electronic Frontier Foundation. They’ve accused Ring of using its cameras and Neighbors app (which delivers safety alerts) to build a private surveillance network via police partnerships. The Electronic Frontier Foundation in particular has singled out Ring for marketing strategies that foster fear and promote a sale-spurring “vicious cycle,” and for “[facilitating] reporting of so-called ‘suspicious’ behavior that really amounts to racial profiling.”