Thanks to its efficiency and support for numerous programming languages, gRPC is a popular choice for microservice integrations and client-server communications. gRPC is a high performance remote procedure call (RPC) framework using HTTP/2 for transport and Protocol Buffers to describe the interface.

To make it easier to use gRPC with your applications, Application Load Balancer (ALB) now supports HTTP/2 end-to-end, enabling you to publish gRPC services alongside non-gRPC services via a single load balancer. You can use Amazon Elastic Compute Cloud (EC2) instances or IP addresses (for example with AWS Fargate) as gRPC targets, with support for gRPC health checks for the target groups. In this way, you can use ALBs to terminate, route and load balance the gRPC traffic between your microservices or between gRPC-enabled clients and services.

How to Use gRPC with Application Load Balancer
To test this new feature, I start by preparing the gRPC server application. I am using the Python programming language and the route_guide demo included in the grpc repo. I use this application because it quickly introduces some of the many ways a client and a server can interact via gRPC, such as:

First, I prepare a Dockerfile to have the route_guide application run in a container. Technically, this isn’t necessary because I could use a plain EC2 instance, but using containers with gRPC is so common than this makes the example more relevant.

I build the container image and upload it to Amazon Elastic Container Registry.

In the Amazon ECS console, I create a new cluster using the Networking only template. I name the cluster demo and create a new VPC for this cluster, leaving all other values to their default. The ECS console is using AWS CloudFormation to set up the resources for the cluster. After a few minutes, all resources have been successfully created and the cluster is ready.

To give access to the gRPC traffic, I create a security group to allow inbound TCP traffic on port 50051 from my client laptop. I name this security group gRPC.

Now, I create the load balancer. In the EC2 console, I select Load Balancers on the left, and then Create Load Balancer. In the next step, I create an Application Load Balancer and name it route-guide. I leave the default internet-facing Scheme, because I want to connect to the gRPC service over public internet. In the Listeners section, I select HTTPS as protocol and 50051 for the port. Just below, I select the newly created VPC and the two Availability Zones created by the ECS console.

Next, in the security settings, I choose a certificate I created before, managed by AWS Certificate Manager (ACM).

In the routing section, I create a  new target group named route-guide. Since I am planning to use AWS Fargate to run the gRPC server, I select the IP address target type. The ALB supports both secure and insecure connections for target groups using the gRPC protocol. Here, I use HTTP (because I am using an insecure connection between the load balancer and the containers running the gRPC server) with port 50051. Then, I select the VPC used by the ECS cluster. For Protocol Version, I use gRPC. 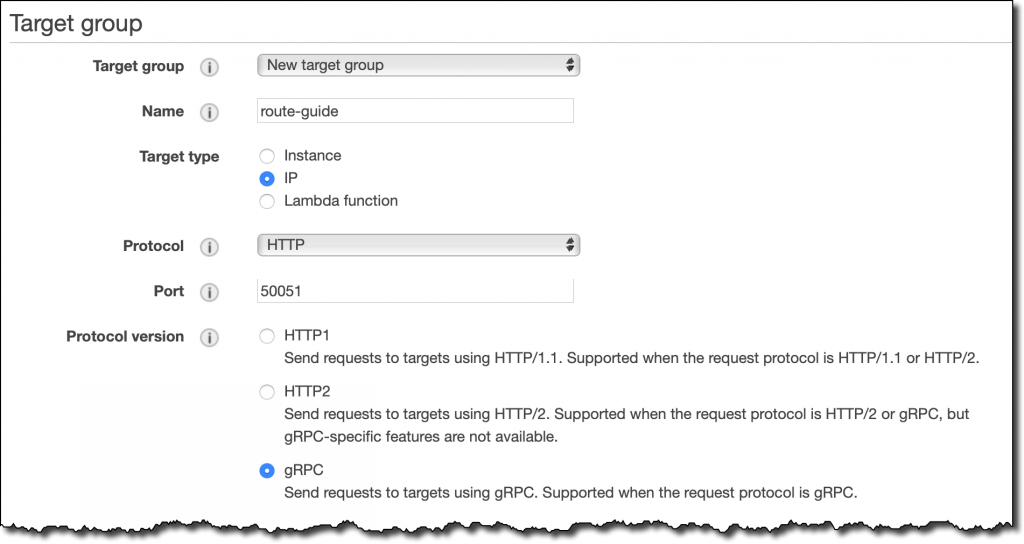 In the Advanced health check settings, I can specify which gRPC Success codes to use when checking for a correct response. I leave the default of 12 which means unimplemented. 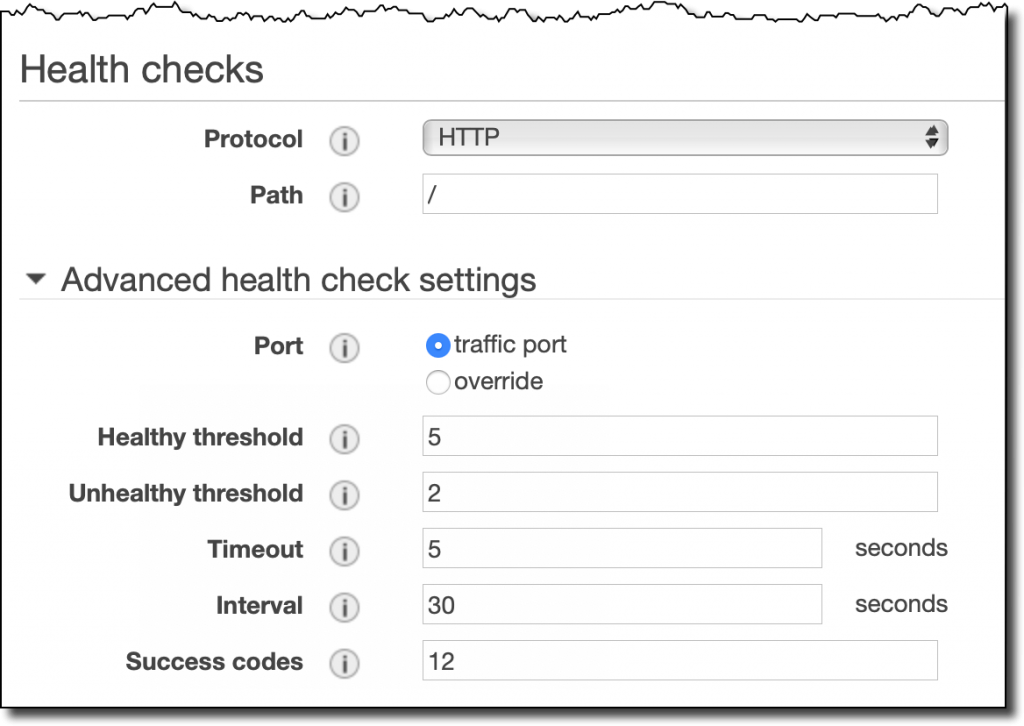 Code 12 is returned by a gRPC server if a method is not found. It works in this case because I’m using a path that is not implemented by the route_guide application. More generally, checking for code 12 is a quick way to verify that your gRPC server is running correctly. To be more specific in your health checks, you can use a single code, a list, or a range, depending on what you expect from your implementation.

In the next step, I don’t register any target and complete the creation of the target group.

Back in the ECS console, I create a new task definition compatible with the Fargate launch type. I name it route-guideand give it a minimum amount of resources: 0.5 GB of memory and 0.25 CPU units. I add a container definition using the image URI of the container image I uploaded to ECR, and the container port 50051/tcp, the network port exposed in the Dockerfile above. 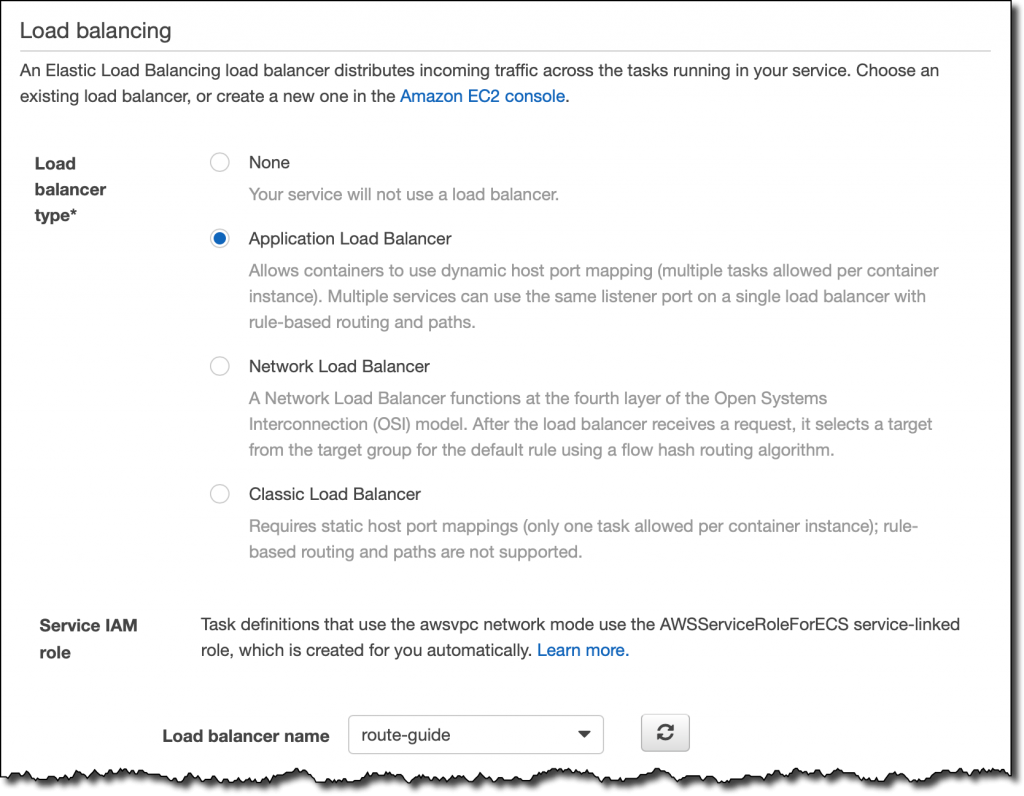 Then, I choose the route-guide target group.

At the next step, I select Do not adjust the service’s desired count to not use auto scaling for this demo.

I complete the creation of the ECS service. After a few minutes the two tasks are RUNNING. Looking at the Targets tab of the route-guide target group, I see that the two targets are healthy. The load balancer is now ready to accept traffic.

In my client laptop, I edit the route_client.py file in the gRPC repo to use a secure channel when connecting to the load balancer. This is the part of the code that I change:

Now, I start the client to test the gRPC channel with some workload. In the output, I see that the route_guide application is using unary, server-side streaming, client-side streaming, and bi-directional streaming in the request and the response.

Well, the output is pretty long, but as I said at the beginning of this post, the route-guide demo is showing many of the different ways a client and a server can interact using gRPC, beyond basic RPC invocations.

Available Now
End-to-end HTTP/2 and gRPC Support is available today for new and existing Application Load Balancers in all regions. You can use this feature via the console, AWS Command Line Interface (CLI), AWS SDKs. We are working to add AWS CloudFormation support soon.

There is no additional cost for using the gRPC protocol with an ALB. For more information, you can see the Elastic Load Balancing pricing page.

With these new features, it’s much easier to use gRPC to integrate your applications, or to improve client/server communication. To learn more, please see the documentation.