Even if you occasionally worked from home before the COVID-19 pandemic, there’s a good chance you weren’t prepared for the challenges of doing so five days a week — especially if your partner and/or children share your newly combined living and working space. A house that once comfortably held four people might suddenly feel like a collection of prison cells, as desks and chairs pop up in bedrooms, and particularly unlucky family members commandeer bathrooms or garages as “quiet spaces” for video meetings.

Over the past six months, I’ve been working through these sorts of challenges with my own family, at one point setting up two parents’ desks on opposite sides of the same living room while my kids attended virtual classes from their bedrooms. Most of the experiments have worked, but when they haven’t, I’ve searched for affordable technologies to fill in some gaps.

For my family, the biggest game changer has been noise-killing headphones that let people work or study while they’re right next to family members. The absence of sonic interference is really critical to feeling as If you have the space to think normally, and I’d argue that ambient noise has become a huge issue during the pandemic. Adults face the constant risk of being interrupted mid-meeting or mid-thought by a barking dog, a crying child, or a noisy lawn maintenance service, even if they’re your neighbor’s and out of your control. Kids have to focus on their lessons and homework through the same sounds, plus the distractions of siblings whose rooms are most likely only a shared wall away.

A computer typically has a mute button to keep others from hearing the sounds around you, but since life doesn’t have a mute button, a good pair of headphones can serve as a substitute. Since they can be expensive — I’ve used and liked Apple’s $249 AirPods Pro since they came out last year — I’ve been hunting for more affordable alternatives my kids can use for their classes. Here’s what you should know before buying a pair.

There are two ways headphones block out noise: passive isolation and active cancellation. Think of them as the difference between a shield (passive) and sword (active), which can be used separately or together to protect ears from noise.

In my experience, when passive noise isolation works, it gives you the best bang for the buck. Here, a physical shield covers either the outside or inside of your ear with a material that keeps external sounds from coming in. The most basic form of passive noise isolation is an earplug that sits inside your ear canal, but once there’s a speaker inside, that’s an in-ear headphone (also known as a “canalphone”). Another passive alternative is a traditional headphone cup that fully surrounds your ear, isolating it from the outside, though most cups don’t seal your outer ears as well as canalphones seal your inner ears

Active noise cancellation is a sword in that it aggressively fights ambient noise by responding directly to it with inverse sounds, cancelling out the noise. To do that, the canalphone or headphone speaker is paired with an external microphone that hears the ambient noise, working with circuitry to create inverse signals. That adds complexity, cost, and the need for battery power, but can deliver better protection against noise than passive isolation alone. Unfortunately, if you’re on a tight budget, springing for actually useful active noise cancellation may well break it — there are “ANC” solutions at lower prices, but they tend not to be very good.

In my hunt for inexpensive wireless options that will work with my kids’ tablets and computers, I’ve had to look past big manufacturers such as Apple, Bose, and Sony in favor of smaller brands — companies that tend to make performance compromises in the name of lower prices. The question is whether you can live with the compromises, and given my current budget and kids’ needs, the answer is “yes.” 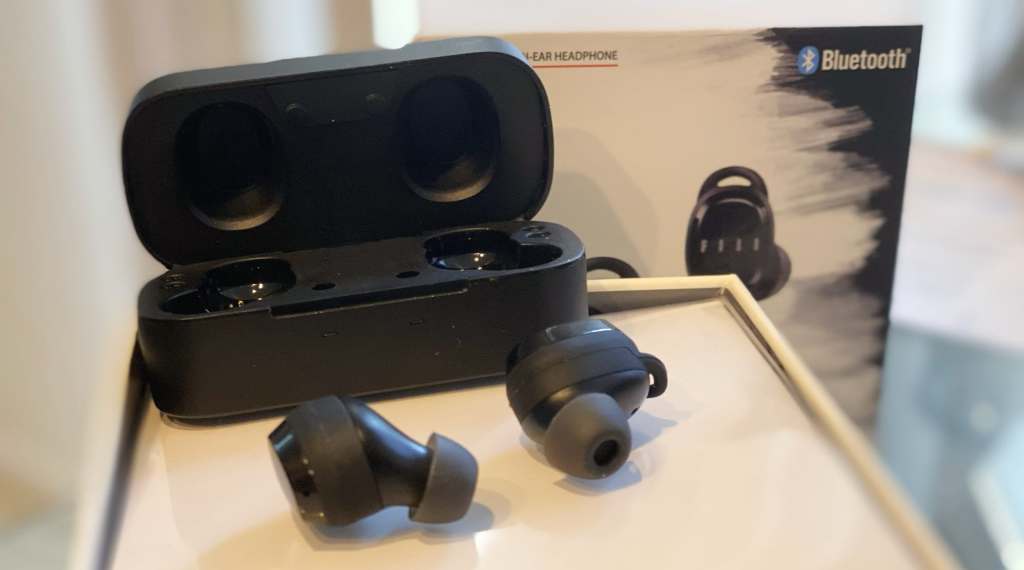 For my money, it’s easy to recommend the FIIL T1X, a sub-$50 pair of in-ear headphones that aren’t as different from Apple’s AirPods Pro as they should be at a $200 lower price point. You still get the passive noise isolation of interchangeable silicone rubber tips that fit inside your ear canals, plus three different sizes of “earwings” for extra stabilization, something Apple doesn’t offer. Moreover, you get 24 hours of audio playback time, and the convenience of super-fast Bluetooth 5 pairing. On the other hand, they drop active noise cancelling hardware, and while they recharge wirelessly inside an included case, the case itself doesn’t recharge wirelessly; it’s USB-C.

In my testing, T1X blocked outside noise roughly as well as the AirPods Pro, and though the overall sound the T1X speakers put out is only 80-90% as clear as Apple’s, you still get solid bass along with fine mids and highs. They also have integrated microphones so you can participate in video chats — subject, of course, to whatever ambient noise might be around you. While some companies use sophisticated dual-mic and beamforming audio solutions that focus spoken input squarely on your mouth, T1X doesn’t have that sort of hardware.

I wasn’t as fond of another FIIL model I tried, a pair of active noise cancelling headphones called Canviis that sell for under $160 — half the price of higher-end Apple (Beats), Bose, and Sony models with similar hardware. They’re supposed to be “over ear” headphones, which suggests they’ll be ear cups, but instead they’re an on-ear design that doesn’t provide much passive noise blocking at all, even on my youngest daughter’s smaller ears. While they sounded fine, we tested them to see whether they’d work well in active cancellation mode to screen out sound for my work day or her school sessions, and the answer was “no.” 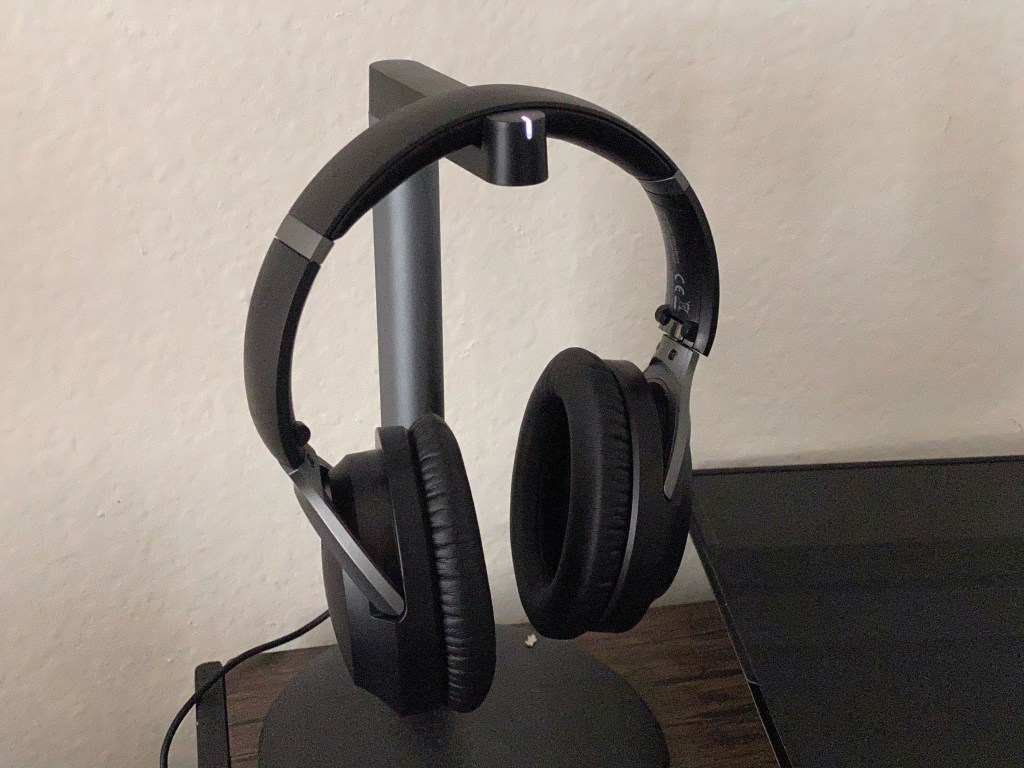 A better choice for the same price is Avantree’s Aria Me, which combines the passive isolation of full-sized ear cups with active noise cancellation, plus two really neat bonus features. A free app lets you tweak the equalization of the speakers to match your own sonic preferences, using six bands that represent the spectrum from highs to mids and lows. Avantree also includes a full recharging stand that keeps the headphones’ 24-hour battery topped off, a huge benefit for kids who struggle with charging cables and keeping their workspaces tidy. (A similar version called Aria Podio is available for $130.)

One issue with Aria Me: the microphone it includes for audio chats and phone calls isn’t integrated into one or both of the ear cups; instead, it’s a detachable boom mic that you can pop on and off as needed. Placed in front of your mouth, the mic will likely do a better job of focusing on your speech (compared with ambient sound) than most, but it won’t look as fashionable. Business users mightn’t care, but kids may, so if that matters, a less conspicuous option like the T1X might be a better pick.

If you’re not on a tight budget, you can expect to pay $250 or more for a pair of premium high-end wireless headphones with active noise cancellation. Apart from Apple’s aforementioned AirPods Pro, Sony’s $350 WH-1000XM4 is already earning rave reviews as the follow up to its popular XM3 predecessor, with a full ear cup design, great audio quality, and comfort.

My strong advice would be to try a more affordable model such as the ones mentioned above first, and see if it suits your needs before dropping a huge wad of cash on headphones. Noise cancellation doesn’t have to cost you an arm and a leg, but if it saves your sanity and helps you work or study, it may ultimately be worth whatever price you decide to pay.