As physical retail struggles amid the global pandemic, storeowners are rapidly trying to adapt to new realities that also include growing competition from Amazon. But a French startup called Storelift believes it can create a new convenience store concept that leans on many of the same AI and computer vision tools used in Amazon Go stores to reinvent the shopping and checkout experience.

This week, Storelift announced that it has launched its first two stores under the name “Boxy.” The Boxy stores are repurposed shipping containers that can be plopped down in various urban neighborhoods that lack good shopping options.

The founders believe their approach demonstrates how businesses can exploit new shopping niches with the help of sensors, data, and AI that allows them to optimize their inventory and reduce costs.

“Our vision is really to address all the city areas where there are 10,000 people who have no convenience store,” Storelift CEO and cofounder Tom Hayat said. “We want to be as close to the customers as possible.”

Physical retailers have been hit hard during the pandemic, but they were already suffering from a variety of trends that were upending people’s shopping habits. Over the past several years, Amazon has opened 26 Amazon Go convenience stores in the United States. These stores use a mix of AI and sensors to power a self-checkout system. And of course Amazon also acquired grocery chain Whole Foods in 2017, which further expanded its physical footprint.

Even as Amazon encroaches further into local markets, food delivery services are also surging, accelerating a more fundamental change in the way people shop and eat. And Silicon Valley startup Bodega has developed a concept that uses AI and mobile retail to create a new kind of vending machine that tries to leverage proximity to consumers to create a new experience.

In this battlefield, the founders of Storelift believe there is still a critical niche left for them to seize by offering a larger selection than a vending machine but still operating in proximity to consumers. Average purchases at convenience stores total around $12, a sum too small to make delivery an economically viable option. And while Amazon continues to expand, the problem in urban areas is that real estate and labor costs can make it prohibitive to open new convenience stores in many neighborhoods. Meanwhile, existing ones tend to offer a limited selection, particularly when it comes to fresh, prepared foods.

Hayat started Storelift with cofounder David Gabai to address those issues by creating a chain of connected, autonomous convenience stores that are open 24 hours a day, 7 days a week. The first two Boxy stores are now open for business in the Paris-adjacent Port de Gennevilliers and Icade Rungis industrial park.

Founded in late 2018, the company uses a 20-foot shipping container that has room for more than 200 products. Much of the hardware is off-the-shelf sensors, computer vision cameras, and shelves that detect weight. The company also mixes in its customized hardware, along with its own software and algorithms and a small datacenter in each unit. Food products, primarily organic, are ordered from a wholesaler and then prepared and shipped from a Storelift warehouse to the Boxy units. 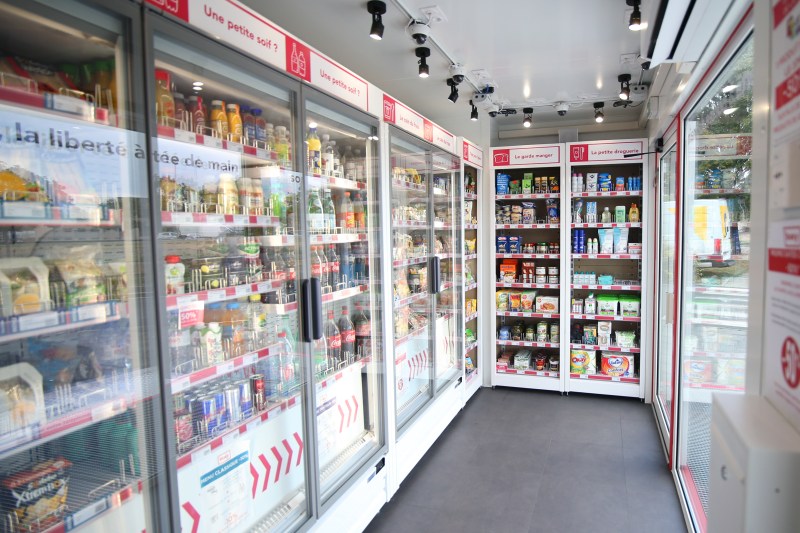 To shop at Boxy, a customer downloads the Boxy app on their smartphone and then scans the QR code on a product before putting it in the shopping basket. When a customer leaves the store, the checkout and payment happen automatically.

The key to improving efficiency is the data the company is collecting as people shop. The shelves that detect weight, along with computer vision cameras, know when a product is picked up, looked at, and then either put in the basket or back on the shelf. In some cases, because the company knows a customer is possibly interested in a product, they can offer a discount on the spot to nudge them along.

“We know the products you touch and if it’s too expensive,” Hayat said. “From that, we can optimize the replenishment, assortment, and doing promotion campaigns in one click. We have the granularity of ecommerce data so we can improve the offer every day. We know what products are working and which ones are not.”

Internally, the company’s machine learning system is analyzing gestures and decisions made by the customer to suggest improvements in product selection, pricing, and placement.

Hayat noted that because Storelift does not use facial recognition, the company is not officially collecting personal data via its computer vision because the data is not associated with a specific customer. As for GDPR rules, the data is gathered and analyzed locally, allowing the company to monitor its use to ensure it doesn’t run afoul of the privacy rules.

The company now has 24 employees and is expanding. Having launched the stores, the next step is scaling the number of Boxy units in the coming months. Earlier this year, Storelift raised $6 million in venture capital. Cap Horn led the round of funding, which also included money from LocalGlobe.

“We can have a real impact in the day-to-day lives of consumers,” Hayat said. “With our technology, we can give people access to a convenience store at the right price.”