What is anomaly detection?

Human beings have excellent intuition and can detect when something is out of order. Often, an anomaly or outlier can appear so obvious you just “know it when you see it.” However, you can’t base computational approaches to anomaly detection on such intuition; you must found them on mathematical definitions of anomalies.

The mathematical definition of an anomaly is varied and typically addresses the notion of separation from normal observation. This separation can manifest in several ways via multiple definitions. One common definition is “a data point lying in a low-density region.” As you track a data source, such as total bytes transferred from a particular IP address, number of logins on a given website, or number of sales per minute of a particular product, the raw values describe some probability or density distribution. A high-density region in this value distribution is an area of the domain where a data point is highly likely to exist. A low-density region is where data tends not to appear. For more information, see Anomaly detection: A survey.

For example, the following image shows two-dimensional data with a contour map indicating the density of the data in that region.

The data point in the bottom-right corner of the image occurs in a low-density region and, therefore, is considered anomalous. This doesn’t necessarily mean that an anomaly is something bad. Rather, under this definition, you can describe an anomaly as behavior that rarely occurs or is outside the normal scope of behavior.

The algorithmic core of the anomaly detection feature consists of two main components:

You can use the RCF algorithm to summarize a data stream, including efficiently estimating its data density, and convert the data into anomaly scores. Anomaly scores are positive real numbers such that the larger the number, the more anomalous the data point. For more information, see Real Time Anomaly Detection in Open Distro for Elasticsearch.

We chose RCF for this plugin for several reasons:

Based on these constraints and performance results from internal and publicly available benchmarks across many data domains, we chose the RCF algorithm for computing anomaly scores in data streams.

But this begs the question: How large of an anomaly score is large enough to declare the corresponding data point as an anomaly? The anomaly detector uses a thresholding model to answer this question. This thresholding model combines information from the anomaly scores observed thus far and certain mathematical properties of RCFs. This hybrid information approach allows the model to make anomaly predictions with a low false positive rate when relatively little data has been observed, and effectively adapts to the data in the long run. The model constructs an efficient sketch of the anomaly score distribution using the KLL Quantile Sketch algorithm. For more information, see Optimal Quantile Approximation in Streams.

The confidence score is a measurement of the probability that the anomaly detection model correctly reports an anomaly within the algorithm’s inherent error bounds. We derive the model confidence from three sources:

We demonstrate the effectiveness of the new anomaly detector feature on the New York City taxi passenger dataset. This data contains 6 months of taxi ridership volume from New York City aggregated into 30-minute windows. Thankfully, the dataset comes with labels in the form of anomaly windows, which indicate a period of time when an anomalous event is known to occur. Example known events in this dataset are the New York City marathon, where taxi ridership uncharacteristically spiked shortly after the event ended, and the January 2015 North American blizzard, when at one point the city ordered all non-essential vehicles off the streets, which resulted in a significant drop in taxi ridership.

We compare the results of our anomaly detector to two common approaches for detecting anomalies: a rules-based approach and the Gaussian distribution method.

In a rules-based approach, you mark a data point as anomalous if it exceeds a preset, human-specified boundary. This approach requires significant domain knowledge of the incoming data and can break down if the data has any upward or downward trends.

The following graph is a plot of the NYC taxi dataset with known anomalous event periods indicated by shaded regions. The model’s anomaly detection output is shown in red below the taxi ridership values. A set of human labelers received the first month of data (1,500 data points) to define anomaly detection rules. Half of the participants responded by stating they didn’t have sufficient information to confidently define such rules. From the remaining responses, the consolidated rules for anomalies are either that the value is equal to or greater than 30,000, or the value is below 20,000 for 150 points (about three days). 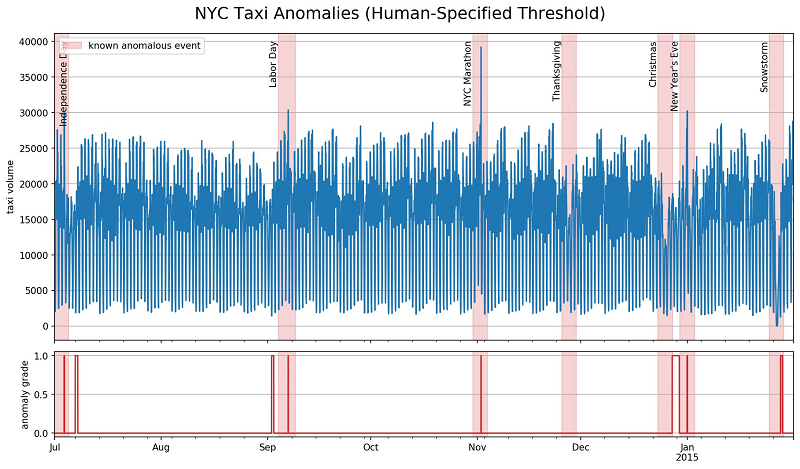 In this use case, the human annotators do a good enough job in this particular range of data. However, this approach to anomaly detection doesn’t scale well and may require a large amount of training data before a human can set reasonable thresholds that don’t suffer from a high false positive or high false negative rate. Additionally, as mentioned earlier, if this data develops an upward or downward trend, our team of annotators needs to revisit these constant-value thresholds.

A second common approach is to fit a Gaussian distribution to the data and define an anomaly as any value that is three standard deviations away from the mean. To improve the model’s ability to adapt to new information, the distribution is typically fit on a sliding window of the observations. Here, we determine the mean and standard deviation from the 1,500 most recent data points and use these to make predictions on the current value. See the following graph. 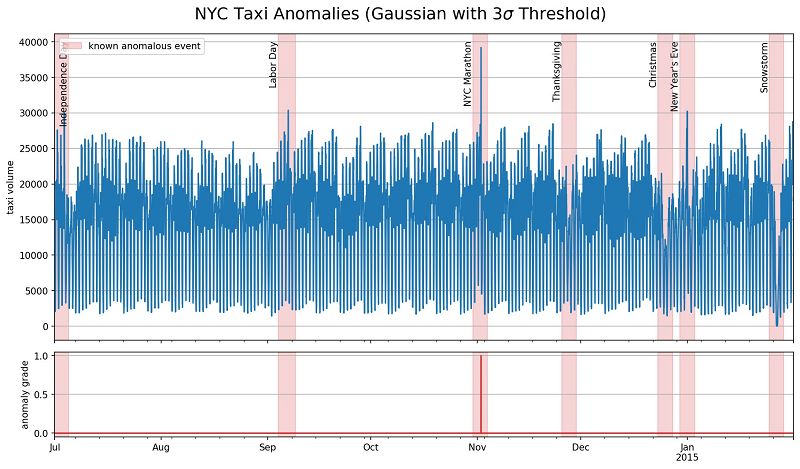 The Gaussian model detects the clear ridership spike at the marathon but isn’t robust enough to capture the other anomalies. In general, such a model can’t capture certain kinds of temporal anomalies where, for example, there’s a sudden spike in the data or other change in behavior that is still within the normal range of values. 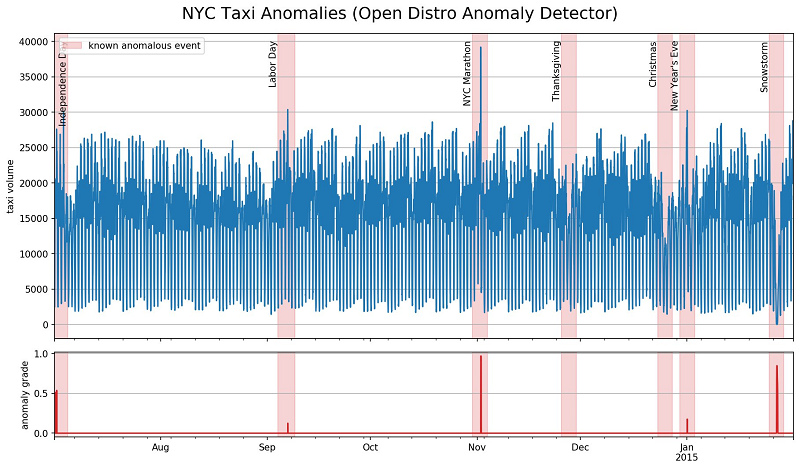 Five out of seven of the known anomalous events are successfully detected with zero false positives. Furthermore, with our definition of anomaly grade, we can indicate which anomalies are more severe than others. For example, the NYC Marathon spike is much more severe than those of Labor Day and New Year’s Eve. Based on the definition of an anomaly in terms of data density, the behavior observed at the NYC Marathon lives in a very low-density region, whereas, by the time we see the New Year’s Eve spike, this kind of behavior is still rare but not as rare anymore.

Chris Swierczewski is an applied scientist in Amazon AI. He enjoys hiking and backpacking with his family.

Lai Jiang is a software engineer working on machine learning and Elasticsearch at Amazon Web Services. His primary interests are algorithms and math. He is an active contributor to Open Distro for Elasticsearch.

RP1 debuts a scalable platform for the ‘shardless’ metaverse